This week we’ll begin with our monthly and weekly forecasts of the currency pairs worth watching. The first part of our forecast is based upon our research of the past 11 years of Forex prices, which show that the following methodologies have all produced profitable results:

Let’s take a look at the relevant data of currency price changes and interest rates to date, which we compiled using a trade-weighted index of the major global currencies:

We forecasted that the pair most likely to change in value significantly during the month of April will again be EUR/USD in the short direction. This pair had been the strongest mover over the previous 3 months, with the exception of the CHF. Recent strong moves in the CHF have looked abnormal and suspicious, therefore we have refrained from forecasting a fall in EUR/CHF.

The monthly forecast has performed to date as follows:

We made no weekly forecast last week.

This week, we expect that USD/CAD will rise in value, which GBP/USD will fall in value. As both pairs involve the USD, it could be wise to split the total risk.

This week saw a weakening across the board in the USD, which is in danger of losing its status as the strongest currency over the previous 3 months. The replacement of the USD with an alternative strong currency seems likely to occur if at all with the NZD, which is bolstered by a very high rate of interest, relatively speaking, and some positive recent economic data.

There was a decrease in volatility this week, with approximately half of the major and minor currency pairs fluctuating in value by more than 1%.

You can trade our forecasts in a real or demo Forex brokerage account.

Our forecast for March 2015 was short EUR/USD. The forecast performed positively, as shown below:

Our forecast for February 2015 was long USD/CAD. The forecast did not perform positively, as shown below:

Our forecast for January 2015 was long USD/JPY. The forecast did not perform positively, as shown below:

Our forecast for December 2014 was long USD/JPY. The forecast performed positively, as shown below:

Our forecast for November 2014 was long USD/JPY. The forecast performed extremely positively, as shown below:

Our forecast for October 2014 was short EUR/USD and long USD/JPY. The forecast performed very positively, as shown below: 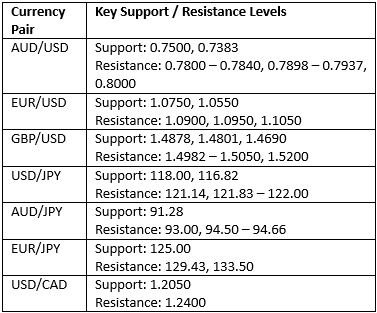 Let’s see how trading some of these key pairs last week off key support and resistance levels could have worked out:

We had expected the level at 1.0550 between might act as support, as it had acted previously as both support and resistance. Note how these “flipping” levels can work really well. The H4 chart below shows how early during Monday’s London session the price was held more or less at this support, printing a bullish engulfing candle marked at (1). However there was no break on the upside, so we would have waited until the very next morning when there was another rejection of the area just below 1.0550 followed by a very strong engulfing candle that broke to the upside on the very next candle, giving a long entry marked as (2). This trade would be doing OK and profits should be protected by now. The next hurdle would probably be at around 1.0900. 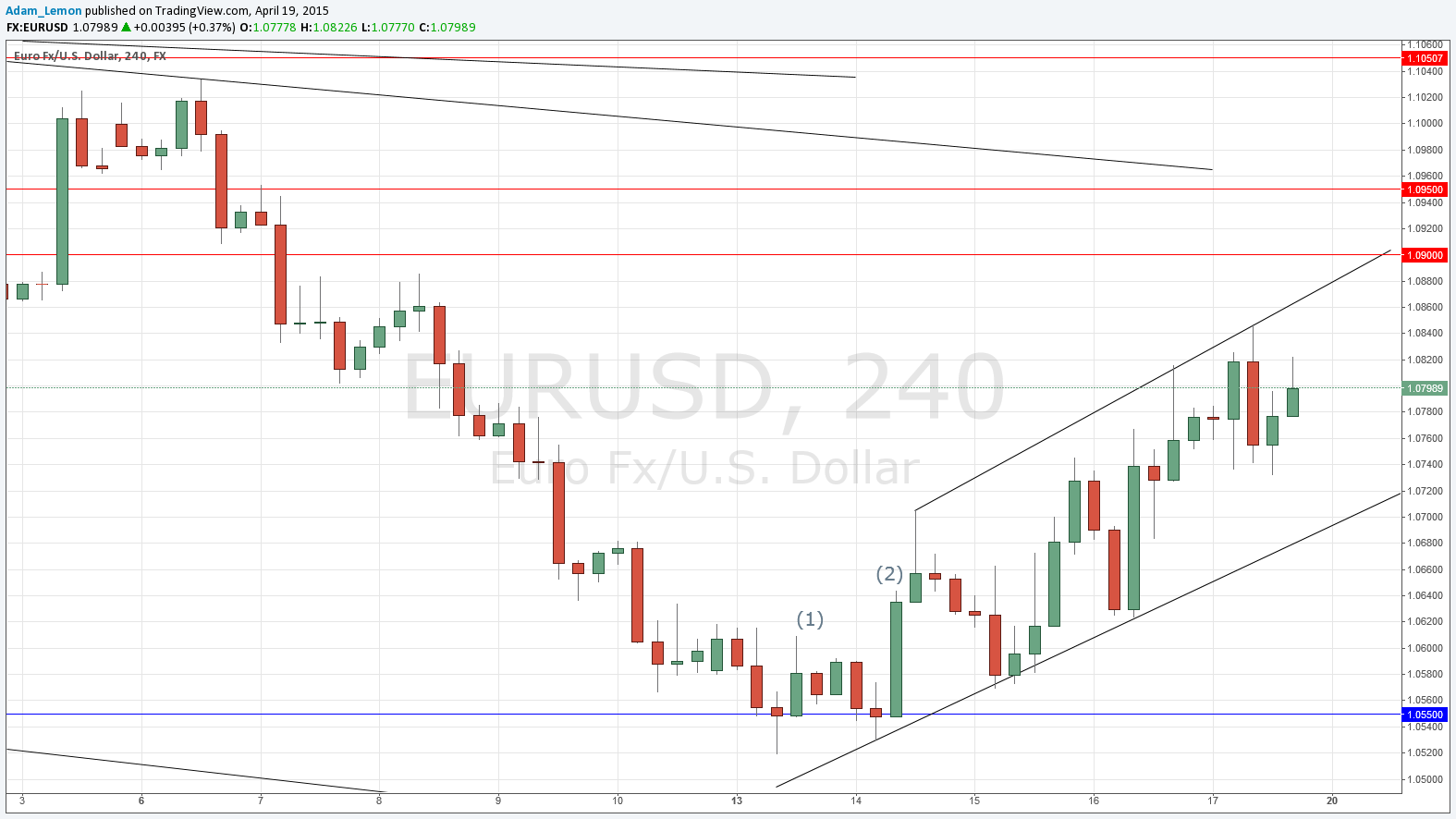 We had expected the zone between 1.4982 and 1.5019 might act as resistance, as it had acted previously as both support and resistance. Note how these “flipping” levels can work really well. The H4 chart below shows how the price finally rose to enter this zone on Friday, from where it has since fallen. However there was no strongly bearish candlestick patter to signify a short, although there would have been if the bearish candle marked at (1) had closed lower than the halfway point of the preceding candle. This is a good illustration that sometimes these levels might be worth trading even without perfect candlestick confirmation. However this pair has been extremely bullish lately, and it is always dangerous to fade such strong and relatively sustained moves too early. 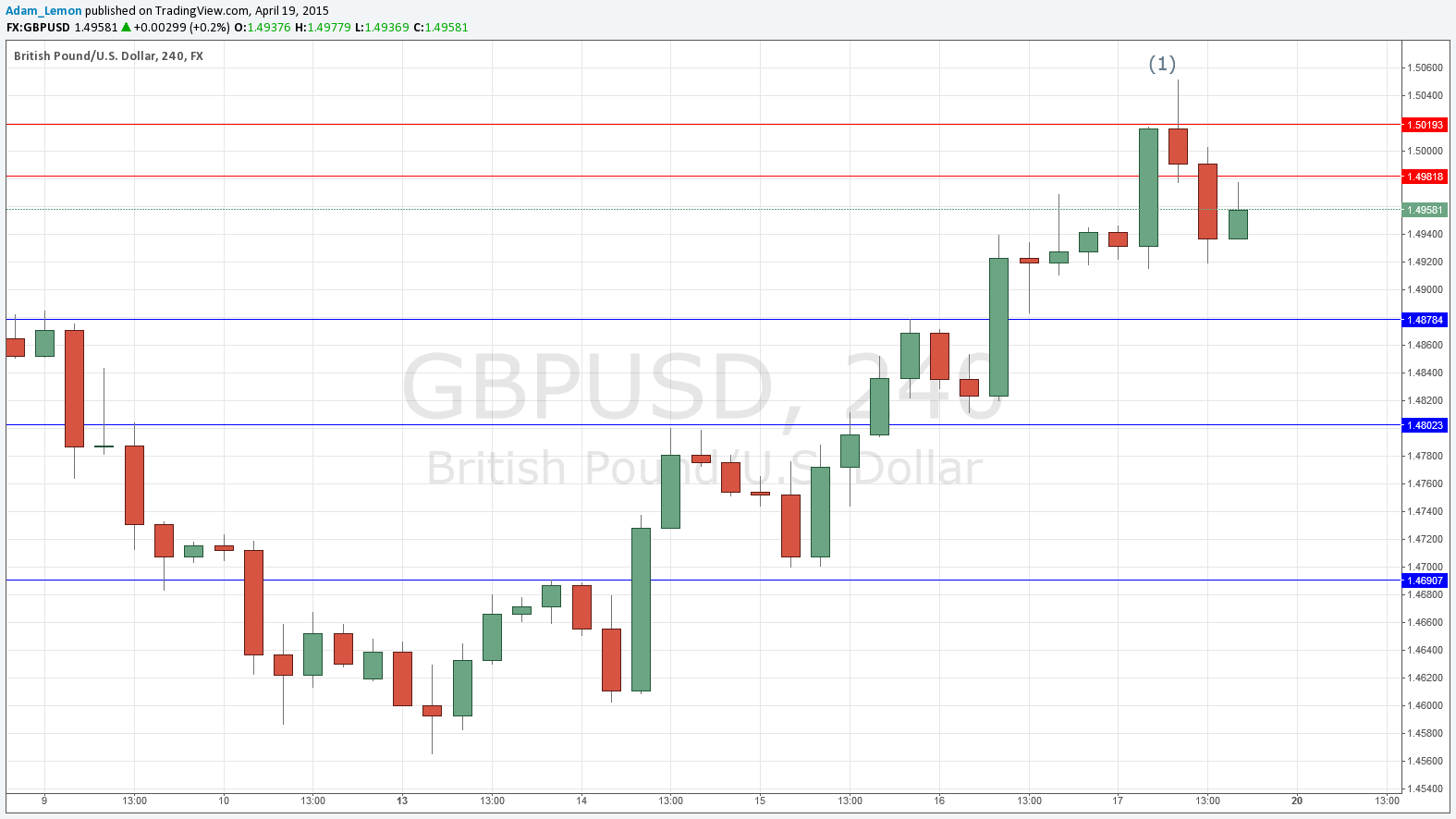